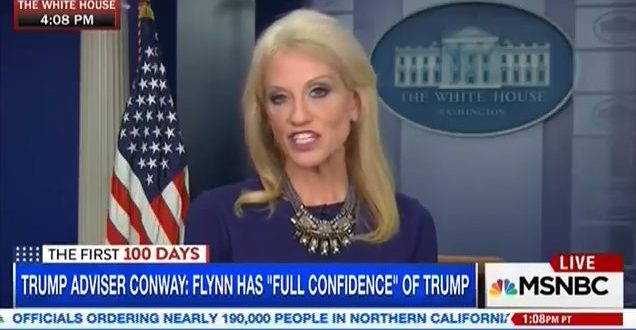 President Donald Trump has “full confidence” in White House national security adviser Michael Flynn, a top aide said Monday, despite the fact Flynn has been unable to deny that he spoke about sanctions against Russia with the Russian ambassador before Trump took office.

Flynn’s possible talk of sanctions — and the fact that he likely misled Vice President Mike Pence about his talks — created a turbulent 72 hours for the White House, leading many to speculate that Trump’s national security adviser could be asked to leave three weeks into his tenure.

But Kellyanne Conway, the counselor to the president, said that was not the case. “Gen. Flynn does enjoy the full confidence of the President,” Conway said on MSNBC. She later declined to detail how much the President knew about the issue and when he knew it, deeming those conversation private.

Moments ago, CNN announced that White House sources say “the knives are out” to have Flynn removed.