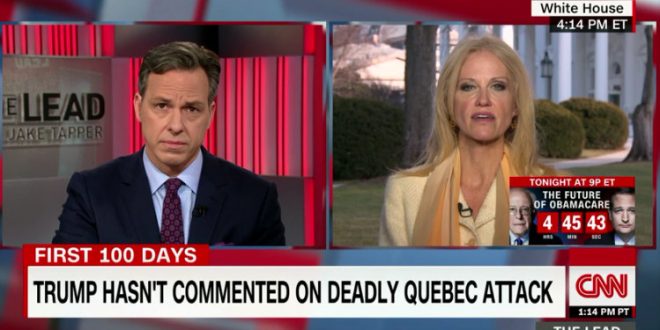 Your head may explode trying to follow the tortured logic of Propaganda Minister Kellyanne Conway. Mediaite sets up the clips below:

Following reports that CNN had refused to accept White House counselor Kellyanne Conway as an interview guest this past Sunday due to concerns over her credibility, Conway showed up on The Lead this afternoon to speak with anchor Jake Tapper.

The conversation immediately became contentious and heated when Tapper confronted Conway over President Donald Trump’s claims that the media has ignored and not reported on terror attacks. He further took issue with the the list that the White House sent out, highlighting that the press covered the vast majority of the attacks they cited and that some were given heavy coverage.

After some additional discussion around Trump not publicly commenting about a white terrorist shooting up a mosque in Canada, Tapper grilled her on the president giving false facts about the current murder rate earlier today. Conway attempted to pivot but Tapper pulled her back to address his questions about the administration’s attacks on the press and the president’s habit of saying false things.

.@jaketapper to Kellyanne Conway: Why hasn’t the President offered his sympathy to our neighbors in the North? https://t.co/YoJ9OYk7d1

Kellyanne Conway on Trump’s false claim that the US murder rate is highest in 47 years https://t.co/Vhi5kCDd8v https://t.co/rUlKjNqwgh