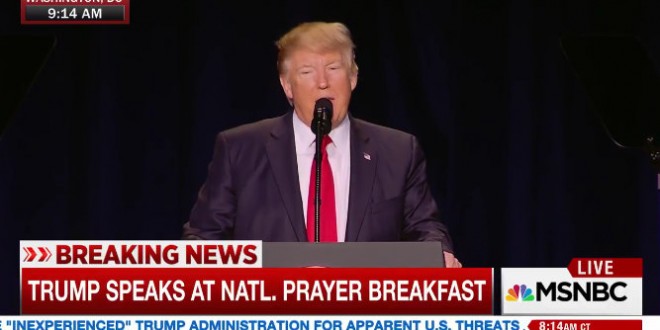 He continued, “The ratings went right down the tubes. It’s been a total disaster. And Mark [Burnett] will never, ever bet against Trump again, and I want to just pray for Arnold, if we can, for those ratings.”

Schwarzenegger, a former governor of California who earned fame for his action movie roles, was hired to replace Trump as host of “The Celebrity Apprentice.” The president is still listed as executive producer of the show.

A spokesman for Schwarzenegger fired back at Trump this morning. “Arnold is praying that President Trump can start improving his own approval ratings, which were the worst in history for an incoming president, by taking his job seriously and working inclusively,” Daniel Ketchell, the spokesman, told ABC News.

WASHINGTON, D.C. — President Trump, at National Prayer Breakfast, talks about “The Apprentice” ratings and the time he fired his agent. pic.twitter.com/z93rGYvqqd

Trump is mocking Arnold for his Apprentice ratings at the National Prayer Breakfast. Next he’ll bash Jesus for only having 12 followers.

At the prayer breakfast I attended, President Obama spoke about how the death and resurrection of Jesus Christ changed his life. https://t.co/NfiDfA5S2I