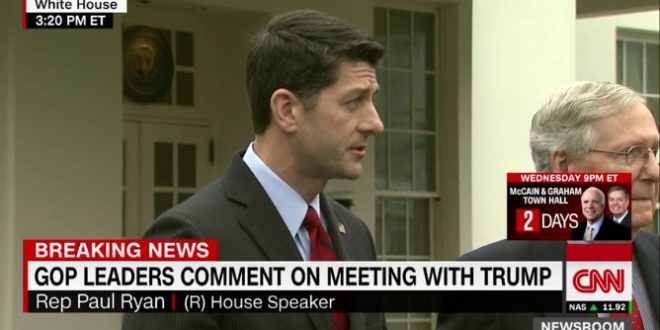 Paul Ryan Contradicts Trump: We Know Russia Meddled In The Election, Nobody Disputes That [VIDEO]

Speaker Paul Ryan got a question after his meeting with President Trump today about calls for a special prosecutor into Russian election interference — spurred on by the comments of one Republican lawmaker.

Ryan said he “can’t speak to” whether Jeff Sessions should recuse himself, and he said the proper place right now for this investigation is the congressional intelligence committees.

“We know Russia meddled in the election,” Ryan said, “No one is disputing that. And this last government gave us that information in the first place. No one is alleging that some American was in on it beforehand.”

Russia talk is FAKE NEWS put out by the Dems, and played up by the media, in order to mask the big election defeat and the illegal leaks!

House Speaker Paul Ryan discusses the investigation into whether the Trump campaign had contact with Russia https://t.co/DYGqUGMkwT

Previous Franklin Graham Blasts Bush’s Daughter On Planned Parenthood Speech: It’s Like Fundraising For Auschwitz
Next SpaceX Founder Elon Musk Reveals That Two Paying Passengers Will Get A Ride Around The Moon In 2018