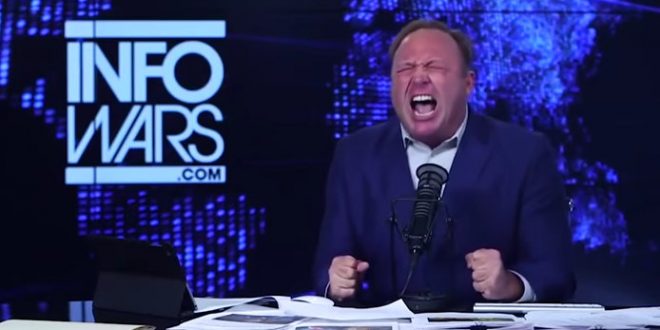 Nutjob Alex Jones Deletes All #Pizzagate Content From Site, Denies He Ever Promoted It On InfoWars [VIDEO]

In a February 24 article for Infowars.com, editor Kit Daniels falsely claimed that “the discussion around Pizzagate largely occurred on Reddit, 4chan and Twitter — but not Infowars,” in an attempt to rebut claims made by former Clinton campaign chair John Podesta during a discussion with John Heilemann.

In fact, Alex Jones promoted the “Pizzagate” conspiracy theory on his radio show, urging his listeners “to go investigate it for yourself.” Jones urged his audience to “go to the report, Pizzagate Is Real,” and stated “Something’s going on. Something’s being covered up. It needs to be investigated.”

As you surely recall, one of Jones’ followers literally shot up a DC pizza parlor and then told the local press that Alex Jones was his inspiration. Obviously, Jones deleted the posts because he’s still trying to get White House press credentials. Does he not realize that many of his followers have mirrored his Pizzagate clips on YouTube?