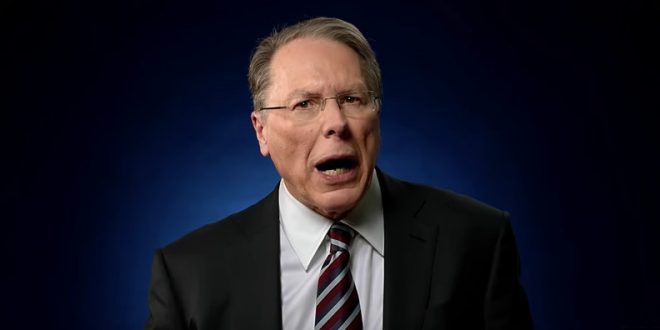 The National Rifle Association is vowing to defend Donald Trump from “the forces who conspired” against his candidacy. The new president “will need every ounce of energy we can muster,” NRA Executive Vice President Wayne LaPierre declares in an ad released this week. “And he has no more powerful ally than the NRA.”

The ad begins with an ominous score and apocalyptic imagery, including shots of angry protesters and video footage of a random fire captured by Russia Today, the Kremlin-sponsored TV network. There are text cards that read, “We won the battle. They couldn’t handle it. So they started a war.” There is a soundbite from House Minority Leader Nancy Pelosi, who says the words “a white supremacist” — not in reference to Trump, as is implied, but about Steve Bannon, the president’s chief strategist.

On Twitter, the video was accompanied by the hashtag #counterresistence, marking the start of the NRA’s latest messaging campaign. “Wayne LaPierre leads the fight,” viewers are informed toward the end of the video, followed by a plug for LaPierre’s upcoming speech at this year’s Conservative Political Action Conference on Friday, which will stream on NRATV.