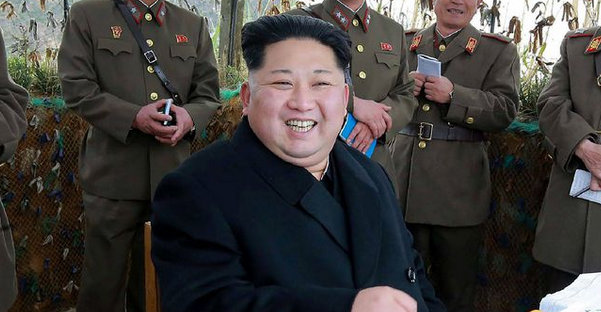 North Korea launched a ballistic missile toward the sea off its eastern coast on Sunday, in what South Korea called the North’s first attempt to test President Trump’s policy on the isolated country.

The projectile took off at 7:55 a.m. from Banghyon, a town near North Korea’s northwestern border with China, and flew 310 miles before falling in the sea, South Korea said in a statement. The South did not provide further information, saying that South Korean and American authorities were still analyzing data collected from the test.

South Korea condemned the missile launching, saying that it violated a series of United Nations Security Council resolutions that bar North Korea from developing or testing ballistic missile and nuclear weapons technologies. It also said the North had launched the missile to raise tensions over its weapons programs and to use it as leverage in dealing with the Trump administration.

“We see this as part of an attempt by the North to grab attention by demonstrating its nuclear and missile capabilities and to counter the new United States administration’s strong policy line against North Korea,” the South Korean military said in its statement.

The sole US response to North Korea's missile launch, so far: Trump saying the US stands with Japan 100%

While Trump was tweeting about how the media mistreated Ivanka, North Korea test-fired a ballistic missile. https://t.co/ZnnzB8LTVB pic.twitter.com/CGZ6lfj5wU