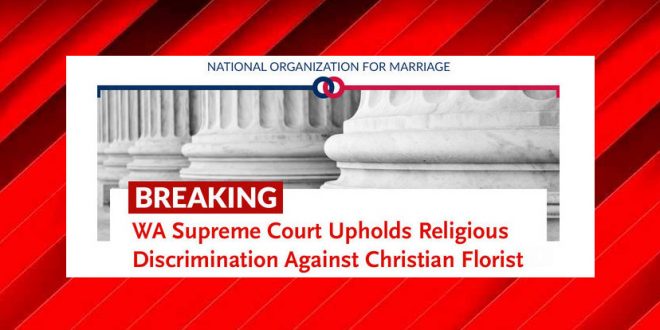 In an expected but nonetheless exceedingly disappointing decision, the Washington state Supreme Court ruled today that the state may punish a Christian florist, Barronelle Stutzman, for declining to violate her religious beliefs and be forced into participating in a gay ‘marriage’ that is against her religion.

This outrageous ruling confirms what we have been saying ever since the US Supreme Court illegitimately redefined marriage in its Obergefell decision — the religious rights of people of faith are being systematically sacrificed on the altar of political correctness and LGBT extremism.

This case is one of many that illustrates why President Trump must act immediately to protect the religious liberty rights of people of faith. Liberal judges simply will not act to protect people with mainstream, traditional views on marriage and sexuality when they conflict with the ever-expansive demands of LGBT extremists. It is up to President Trump and Congress to act.

NOM is working on an emergency communications plan to ramp up public attention on religious liberty and push for a presidential Executive Order and Congressional enactment of the First Amendment Defense Act that will protect people of faith from discrimination by the federal government. Will you help us fight back today against liberal judges and the left with an emergency financial contribution to support religious liberty?