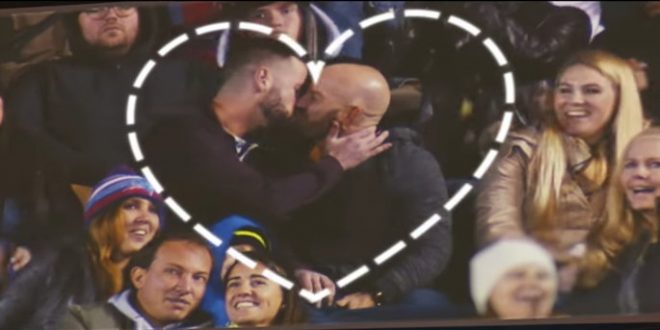 The Ad Council’s original Emmy-winning “Love Has No Labels” skeletons campaign was filmed on Valentine’s Day in 2015, and rolled out a few weeks later. Two years on, we have R/GA’s latest installment in the acclaimed series celebrating inclusiveness and diversity—this one rolling out on Valentine’s Day, having been filmed at the NFL Pro Bowl in January.

The new 2:40 video has some inspired fun with a longstanding tradition at sporting events, the Jumbotron kiss cam, which finds couples in the crowd and encourages them to kiss. This time, though, the kiss cam is used, in the Ad Council’s words, as a “symbol for unbiased love” by featuring all forms of love—friendships, families and romantic relationships—across race, religion, gender, sexuality, ability and age.

The stunt begins with a fun bit of misdirection, as the first couple encircled by the kiss cam’s heart shape are a man and a woman. But the man then turns to his right and kisses his actual partner, who is a man—to cheers from the crowd.

The rest of the video, titled “Fans of Love,” continues in a similar way, featuring all sorts of real people and relationships as a way to celebrate diversity and promote inclusion. “The NFL is strongly committed to diversity and inclusion. We are proud to be working with the Ad Council on their Love Has No Labels campaign,” added Anna Isaacson, the NFL senior vice president of social responsibility.

Note the Pulse survivors at the end.