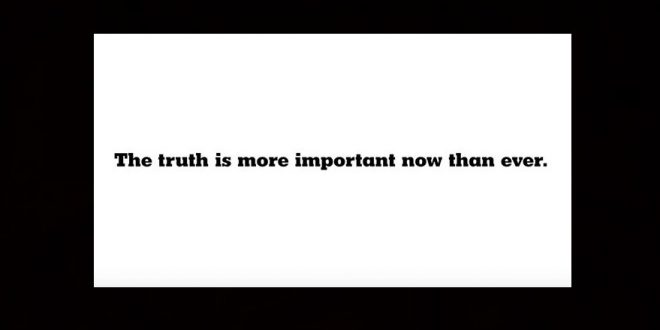 The New York Times is running its first television ad in seven years during the Oscars Sunday night. The subject? The truth. The ad begins with voices saying, “The truth is our nation is more divided than ever,” with those words spelled out against a white backdrop. The phrase then changes to “The truth is alternative facts are lies.” The ad repeats different versions of the “The truth is…” as the voices speed up and get louder. It ends with: “The truth is hard” and “The truth is more important now than ever.”

The ad’s mission is to tap into “national dialogue going on right now about facts and the truth” and what that means in today’s world, according to New York Times branding exec David Rubin. “The idea is to be a part of that discussion about what does it mean to find the truth,” he said. “What does that mean in a world of ‘fake news’? And what is the role of journalism and journalists in that process and what is the role of reader in supporting that journalism?”

Previous Trump Calls On Supporters To Have Trump Rally
Next Franklin Graham On Grace Slick’s Donation To Lambda Legal: All Your LGBT Sins Carry A Death Sentence