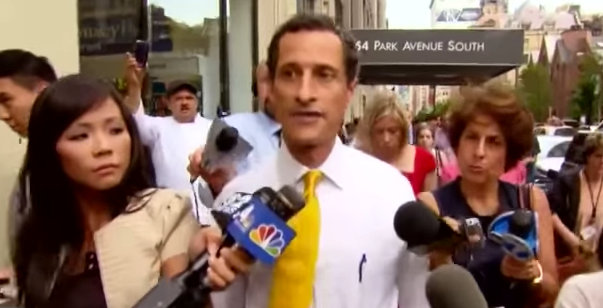 He’s keeping his mouth zipped. A silent Anthony Weiner fled from reporters Wednesday outside his East Side apartment building amid reports that his online wooing of a 15-year-old girl could land him behind bars. The media chased the disgraced ex-congressman down the block outside the Zeckendorf Towers, with the 52-year estranged husband of Huma Abedin clearly in no mood for questions.

Weiner could face up to 15 years in prison if charged with production of child pornography in connection with sexually-charged images and messages shared with the North Carolina teen. A lesser count of receipt of child pornography carries a shorter sentence of five years. The U.S. attorney’s office in Manhattan and the FBI are reportedly putting together the case against Weiner, whose political and personal life were destroyed by his carnal appetites.