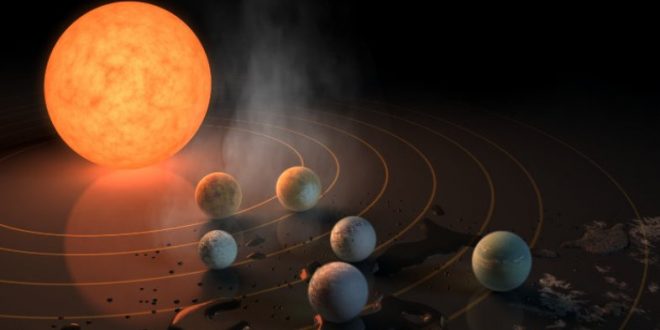 Astronomers from NASA and the European Southern Observatory announced Wednesday that four new Earth-sized exoplanets have been discovered orbiting a star about 40 light-years away, and that three may contain liquid water and be able to sustain life. This star’s small grouping of planets now boasts the most Earth-sized worlds of any system astronomers have discovered, and the most exoplanets that may be able to support surface life and water.

A Belgian-led team was able to spy these planets using space- and ground-based telescopes as they passed in front of their host, a red dwarf star known as TRAPPIST-1. These so called transits created dips in the Jupiter-sized star’s light output that helped astronomers determine the sizes, compositions, and orbits of each of the celestial bodies.

TRAPPIST-1 doesn’t put out much energy, but the inner six exoplanets are in such tight orbit around it that they have temperatures comparable to those on Mercury, Venus, and Earth. The scientists observations and measurements suggest the inner six planets of the system have rocky compositions, and that three of TRAPPIST-1’s surrounding bodies may orbit within a habitable zone that represents the “holy grail for planet-hunting” as they could be warm enough to host surface water, oceans, and extraterrestrial life.