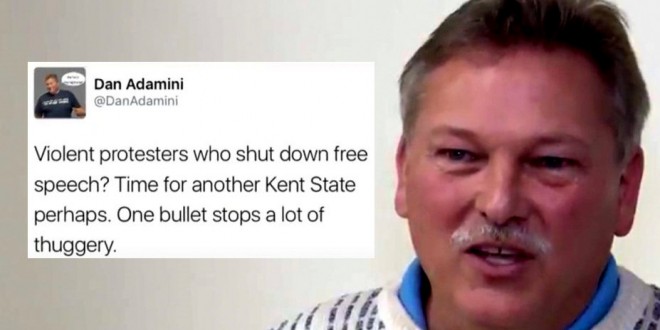 Dan Adamini was upset when he saw the recent protests at U.C. Berkeley. “This was not a protest. This was a riot,” said Adamini. We had buildings being vandalized, we had people being beaten and assaulted.” A tweet, posted by Adamini Thursday morning, said, ‘Violent protesters who shut down free speech? Time for another Kent State perhaps. One bullet stops a lot of thuggery.’

A protest in 1970 on the campus of Kent State University turned deadly, when members of the Ohio National Guard opened fire on people who were protesting America’s invasion of the Vietnam War. “I think we need to crack down on the violence and then we can avoid what a lot of people were thinking I’m actually calling for, which is the shooting of these protestors, and that was not what I was calling for at all,” said Adamini.

His posts on Facebook and Twitter caused quite a firestorm. “The Kent State Massacre left four people dead, nine injured and one person permanently paralyzed,” said Jason Chapman, chairman of the Marquette County Democrats. “We believe in peaceful protesting and that is the cornerstone of our first amendment rights. But when someone suggests the killing of innocent protestors, that is what we believe that there is a problem,” he added. About to go on the air, lots of hate coming from the tolerant left