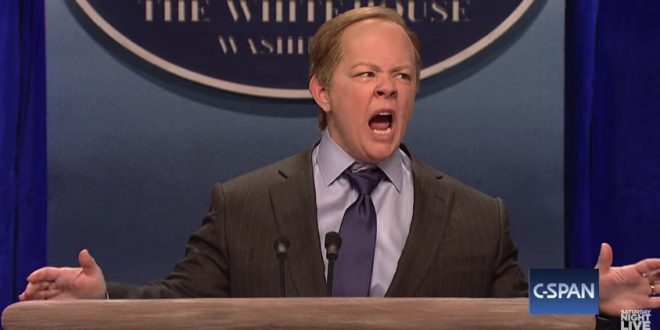 NBC’s “Saturday Night Live” has no shortage of white guys to play White House press secretary Sean Spicer. But this week producers went outside of their cast roster to fill the role with a guest appearance by Melissa McCarthy — who absolutely crushed it.

McCarthy displayed her commanding comedic presence as a fed-up, unhinged Spicer who scolded reporters in a sketch that stretched well beyond seven minutes. She didn’t just imitate a real-life person — McCarthy embodied an outrageous character so effectively that, judging by the studio audience’s delayed reaction at her presence, she was unrecognizable at first.

McCarthy yelled. She chugged gum by the mouthful. She shifted her eyes and gesticulated wildly and went through a rapid-fire series of props to punctuate the press secretary’s point about President Trump’s travel executive order. Comedians tweeted they saw a master at work. Journalists took particular delight at having their world lampooned. Critics raved about the best sketch in ages.