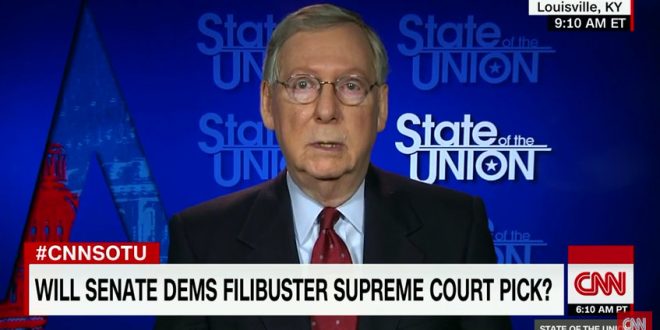 McConnell: Use Of Nuclear Option To Confirm SCOTUS Neil Nominee Gorsuch Is “Up To Democrats” [VIDEO]

Senate Majority Leader Mitch McConnell left the door open to using the “nuclear option” and eliminate the Senate’s rule requiring 60 votes to confirm Supreme Court justices if Democrats attempt a filibuster. “I haven’t said what will happen at that point. I’m confident we will get 60 votes,” the Kentucky Republican told CNN’s Jake Tapper on “State of the Union” Sunday.

Trump had told McConnell that he should “go nuclear” — meaning change the Senate rules — if necessary to get Gorsuch confirmed. McConnell wouldn’t commit either way but did not take that option off the table. “I’m very confident he will be confirmed,” McConnell said. As for how, he said, “I would say that is up to our Democratic friends.”