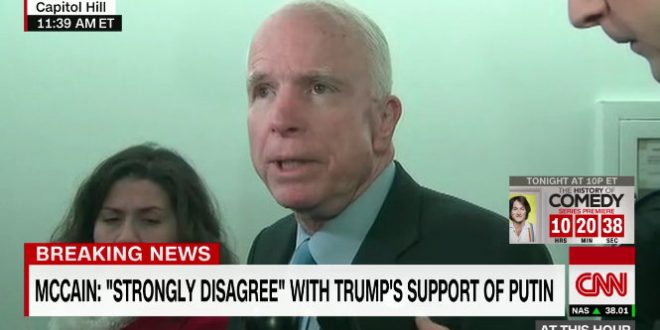 Earlier this morning, President Donald Trump took to Twitter to lob some personal attacks at Sen. John McCain (R-AZ) over McCain’s criticism of the Yemen raid as a “failure.” Following Trump’s mean tweets, CNN’s Manu Raju caught up with McCain on Capitol Hill to get his reaction.

Asked about the Russia Review Act that he signed on to regarding Congress having veto power over the president on Russia, McCain said it was because he’s “concerned about lifting sanctions” due to Trump’s statement “equating the United States and Russia.” When pressed on that point, McCain railed against Trump’s remarks.

“It’s really incredible,” he exclaimed. “That the President of the United States would equate the greatest nation on earth, that has the greatest record of helping people all over the world, with that of Vladimir Putin, who is a butcher and a killer.”

McCain on Trump’s comments equating the US to Putin: “I strongly disagree” https://t.co/uzCSZ3Osvn

Sen. John McCain statement — responding to President Trump’s tweet saying McCain should not be talking about success/failure of missions pic.twitter.com/z4WKnFQTzd

Previous Ethics Expert: Kellyanne Conway Could Face Penalties For Her Self-Described Ivanka Commercial [VIDEO]
Next Rep. Adam Schiff: Gorsuch’s Slam On Trump May Be “Choreographed” To Make Him Seem Independent