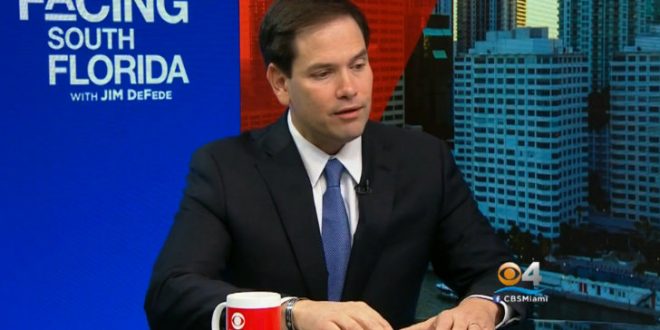 Marco Rubio: I Can’t Do Any Town Halls Because Mean Liberal Activists Will “Heckle And Scream” At Me

Sen. Marco Rubio (R-FL) says he will not participate in town halls because political activists will “heckle and scream” at him to create a media spectacle for the cameras. “They are not town halls anymore,” Rubio told CBS Miami on Sunday. “What these groups really want is for me to schedule a public forum, they then organize three, four, five, six hundred liberal activists in the two counties or wherever I am in the state.”

Rubio told CBS Miami that activists are advised to go early to town halls to “take up all the front seats,” citing a list of protesting tips from the Indivisible movement. “They are instructed to boo no matter what answer I give,” Rubio said. “They are instructed to interrupt me if I go too long and start chanting things. Then, at the end, they are also told not to give up their microphone when they ask questions. It’s all in writing in this Indivisible document.”

RELATED: Last week Loony Louie Gohmert declared the he won’t do any town hall meetings because Gabby Giffords got shot at one.