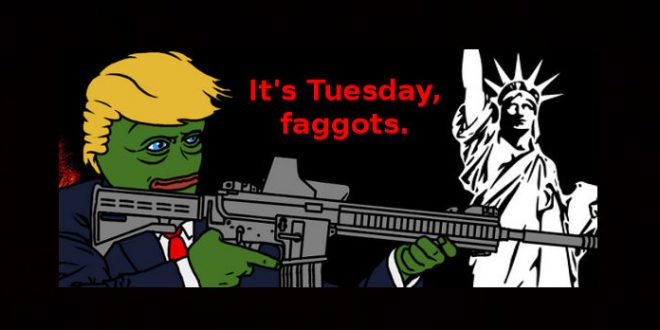 Propelled by the Trump campaign and a new focus on the ‘alt-right,’ the Daily Stormer is now the top hate site in America. The celebrations at The Daily Stormer began early on Nov. 9, just hours after the presidential election was called for Donald Trump. And Andrew Anglin, the neo-Nazi who started the website in 2013, was in full-on arsonist mode.

“Female Hajis Fear to Wear the Headtowel in Public After Trump Win — You Should Yell at Them,” read one of the first post-election headlines written by Anglin that day. “Fear,” he wrote below. “Now is the time for it. We want these people to feel unwanted. We want them to feel that everything around them is against them. And we want them to be afraid.”

“This was not a presidential Election,” Anglin added. “It was a referendum on the international Jewish agenda. And the biggest part of that agenda is multiculturalism.” Anglin and his confederates had plenty of reasons to celebrate. The man Anglin had endorsed 17 months earlier, in the wake of Trump’s out-of-the-gate description of Mexican immigrants as rapists and drug dealers, had won, shocking the entire American political establishment.

The campaign that preceded that victory, with its dog whistles to the racist right, had helped propel Anglin and his movement into public consciousness. Just three months earlier, The Daily Stormer had moved into the real world from cyberspace, setting up a “Troll Army” of activists who follow Anglin’s lead in the vicious online harassment of enemies of his movement.

And in July, four months before Trump’s win, The Daily Stormer had become the most popular English-language website of the radical right, eclipsing the Stormfront site that had held that position since the early days of the Internet.

I encourage you to read the full piece. It’s an eye-opener.