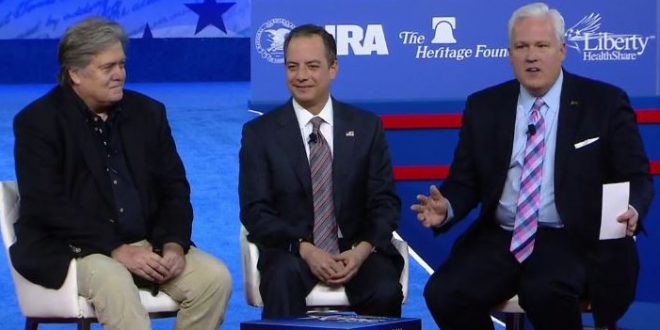 President Donald Trump’s top two advisers will take the stage together Thursday at the Conservative Political Action Conference in their latest attempt to dispel notions that they are combative rivals fighting for power in the West Wing.

White House chief of staff Reince Priebus and chief strategist Steve Bannon found themselves at the center of reports of West Wing in-fighting in the administration’s first hectic weeks, but have recently sought to portray their relationship as collaborative.

In a series of joint interviews in the last two weeks, the two men have emphatically shot down reports of division and instead claimed a chummy, symbiotic relationship. Bannon told The Hill newspaper last week that Priebus “is doing an amazing job.”

“We are executing on President Trump’s agenda in record time. That’s because Reince is getting the job done,” Bannon said. “We are a completely united team dedicated to enacting his bold agenda to bring back jobs and keep this country safe,” Priebus echoed in the interview.

Previous Pope Francis: It’s Better To Be An Atheist Than A Scandalous Hypocritical Catholic Who Exploits The Poor
Next TODAY: Transgender Rights Protest At Stonewall Inn