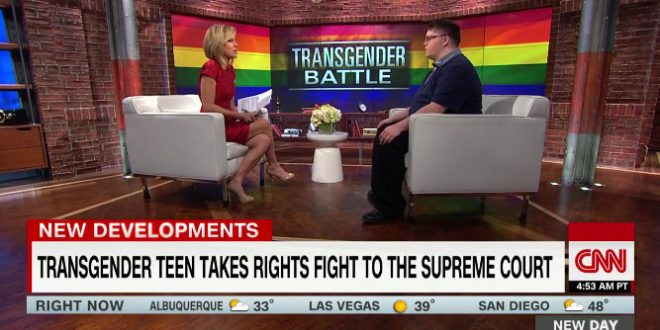 Lawyers for Gavin Grimm, a transgender teen who is barred from using the boys’ bathroom at his Virginia high school, told the Supreme Court Thursday that his challenge to the school board policy should go forward, arguing that the restrooms “must be equally available to all boys and all girls, including boys and girls who are transgender.”

The filing comes the day after the Trump administration withdrew Obama-era guidance on transgender bathroom use in public schools. That guidance issued last May articulated that Title IX — a federal law that prohibits discrimination on the basis of sex in federally funded education programs — includes discrimination based on gender identity.

The Supreme Court is scheduled to hear arguments in Grimm’s case on March 28 and legal experts question whether the justices could decide to use the Trump administration’s move to dodge a ruling on the merits. A lower court had deferred to the Obama administration’s when it ruled in favor of Grimm.

“The withdrawal of the guidance only impacts one of the questions in the case — whether the Obama administration’s guidance was valid. Even without it, the larger question, whether transgender discrimination should be treated as sex discrimination under federal statutes, remains,” said Steve Vladeck, a CNN contributor and professor at the University of Texas School of Law.

Gavin appeared on CNN this morning. Watch below.

Gavin Grimm: “I should be able to use the boys room like any other of my boy peers” https://t.co/CJxR46pFfw

Previous Notorious RBG: Women’s March Tells Me The Pendulum Will Swing Back From These Bad Times [VIDEO]
Next World Net Daily: Witches Nationwide Are Casting Spells Against Trump By Sticking Pins In Baby Carrots