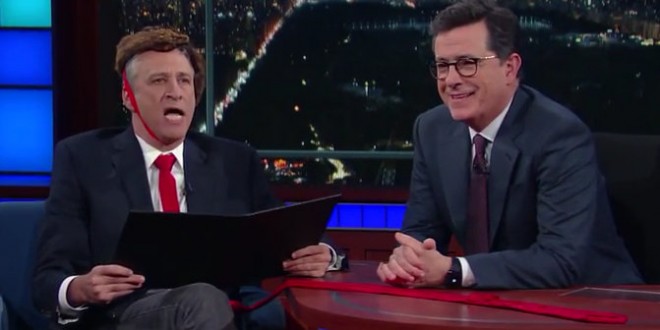 Stewart is no stranger to Colbert’s CBS set, but he’s rarely appeared in such impressive form, decked out in an oversized tie and a “dead animal” in honor of our new president’s fashion sense. It takes alarmingly little time for a punch-drunk Colbert and Stewart to lose the thread of the bit (reading out Trump’s next set of executive orders), but it’s just such a relief to watch the two of them bounce off of each other for ten full minutes that it’s hard to care. And there’s still something refreshing about hearing Stewart return to one of his favorite words, declaring that “The new official language of the United States is bullshit.”

Previous Trump Contradicts Spicer: Call It A “Ban” If You Want
Next NEW YORK CITY: Grindr Sued After Impersonator Sends Over 700 Men To Victim’s Home And Workplace