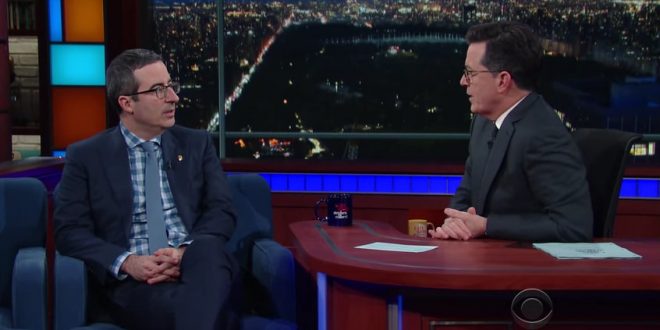 It’s a different late-night game in the era of President Trump, and for John Oliver, “it’s exhausting.” The Last Week Tonight host popped over to The Late Show on Tuesday for a chat with Stephen Colbert about covering the Trump administration, including concerns over troubling Trump advisor Steve Bannon, Secretary of Education Betsy DeVos, and the controversial immigration ban.

“It’s exhausting,” Oliver reflected. “It feels like Inauguration Day was 114 years ago. We have a long way to go, it’s going to be hard. It’s easy to be angry on adrenaline, but it’s much, much harder when you are just tired, and this is going to be exhausting.” Because “words don’t mean anything anymore” (so “why not numbers?”), he half-seriously joked that perhaps Trump could remain president for 12 years.

Oliver goes on to talk about the faded British Empire and whether his green card status will keep him in the country.

Previous Cooper: Trump Watches Me More Than My Mom
Next New York Times Blast Melania’s Libel Suit Revelation That She Plans To “Rake In Millions” As First Lady