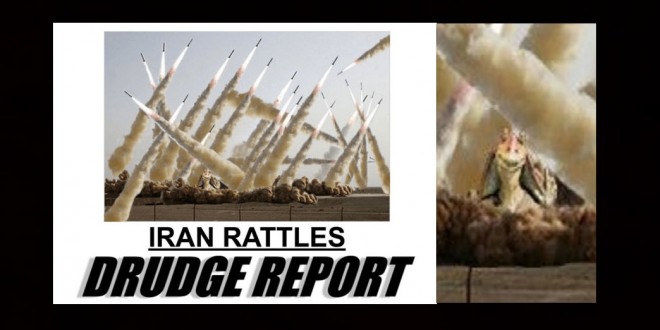 Homocon Matt Drudge was humiliated yesterday with his attempt to back Hair Furor’s threat of war with Iran. The Verge reports:

Drudge Report has made some memorable mistakes. You might remember the time it reported “The Revenant included a rape scene with a bear,” or when owner Matt Drudge made a dangerous situation worse by using Hurricane Matthew to push his anti-climate change agenda. But today, Drudge Report has really outdone itself with the help of — who else? — Jar Jar Binks.

The error started with a link to a Reuters article about tension between the US and Iran following a ballistic missile test by the latter. In response to this sensitive topic, Drudge Report labeled the link “Iran Rattles,” and accompanied the text with an image of dozens of missiles launching across the horizon.

But as one Twitter user points out, there’s a small problem with the picture used. Yes, Jar Jar Binks, the widely despised Gungan from the Star Wars prequels, is tucked between the trails of the dozens of Photoshopped rockets.