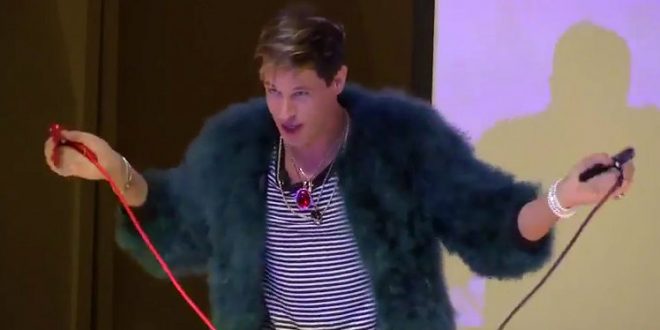 Late last night homocon Milo Yiannopoulos posted a second and lengthy defense of his comments on pedophilia. Some excerpts:

A note for idiots: I do not support pedophilia. Period. It is a vile and disgusting crime, perhaps the very worst. There are selectively edited videos doing the rounds, as part of a co-ordinated effort to discredit me from establishment Republicans, that suggest I am soft on the subject.

If it somehow comes across (through my own sloppy phrasing or through deceptive editing) that I meant any of the ugly things alleged, let me set the record straight: I am completely disgusted by the abuse of children.

I have never defended and would never defend child abusers, as my reporting history shows. The world is messy and complicated, and I recognize it as such, as this furore demonstrates. But that is a red line for any decent person.

The videos do not show what people say they show. I *did* joke about giving better head as a result of clerical sexual abuse committed against me when I was a teen. If I choose to deal in an edgy way on an internet livestream with a crime I was the victim of that’s my prerogative. It’s no different to gallows humor from AIDS sufferers.

I shouldn’t have used the word “boy” when I talked about those relationships between older men and younger gay men. (I was talking about my own relationship when I was 17 with a man who was 29. The age of consent in the UK is 16.) That was a mistake. Gay men often use the word “boy” when they refer to consenting adults. I understand that heterosexual people might not know that, so it was a sloppy choice of words that I regret.

This rush to judgment from establishment conservatives who hate Trump as much as they hate me, before I have had any chance to provide context or a response, is one of the big reasons gays vote Democrat.

Friend of mine, conservative, could not be more distraught by this Milo tape. Was molested as a child. Horrified.

How on earth can CPAC defend this?

Preying on children is the definition of evil. Justifying it in any way is sick and disturbing.

Has everyone lost their minds?

NOTE: The photo for this post is from a recent campus speech in which Milo defended ex-gay torture, about which he says, “There’s no reason to think it doesn’t work. In fact, there are many people for whom it has.”