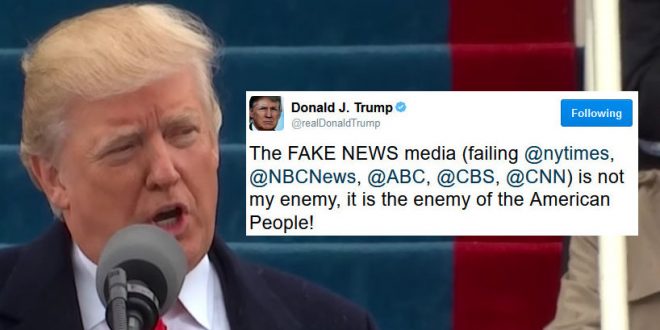 Hair Furor Rants Again: The Fake News Media Is Not My Enemy, They Are The Enemy Of The American People

President Trump launched another salvo in his incessant war against reporters, saying that the news media is “the enemy of the Ameican people.” “The FAKE NEWS media (failing @Nytimes, @CNN, @NBCNews and many more) is not my enemy, it is the enemy of the American people. SICK!,” the President posted on Twitter Friday afternoon.

The post was quickly unavailable after it was posted, though it was not clear why it would have been deleted. Trump’s afternoon disgust at the media came after crowed about his 77-minute press conference on Friday morning and criticized “fake media.”

Trump has since reposted the tweet to add two more networks.

The FAKE NEWS media (failing @nytimes, @NBCNews, @ABC, @CBS, @CNN) is not my enemy, it is the enemy of the American People!

Decoded: one or more of NYT, CNN or NBCNews has a very very damaging story in the pipeline …

Previous New Republic Ponders: Does Trump Have Syphilis?
Next NBA Joins NFL In Warning Texas: Drop That “Bathroom Bill” If You Want To Host Another All-Star Game