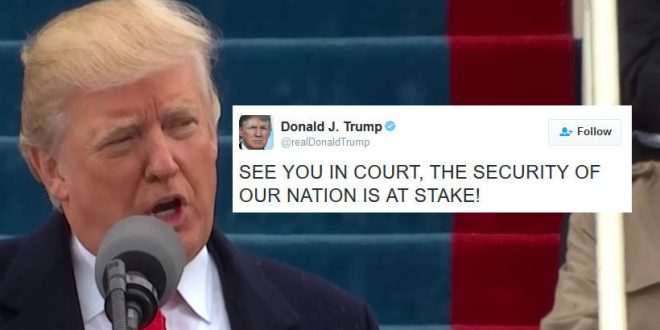 President Donald Trump has tweeted, “SEE YOU IN COURT” after a federal appeals court refused to reinstate his ban on travelers from seven predominantly Muslim nations. Trump’s also says in the tweet that “THE SECURITY OF OUR NATION IS AT STAKE!”

In a unanimous decision, the San Francisco-based 9th U.S. Circuit Court of Appeals upheld a lower-court ruling that suspended the ban and allowed previously barred travelers to enter the U.S. Thursday’s ruling marked another legal setback for the new administration’s immigration policy.

SEE YOU IN COURT, THE SECURITY OF OUR NATION IS AT STAKE!