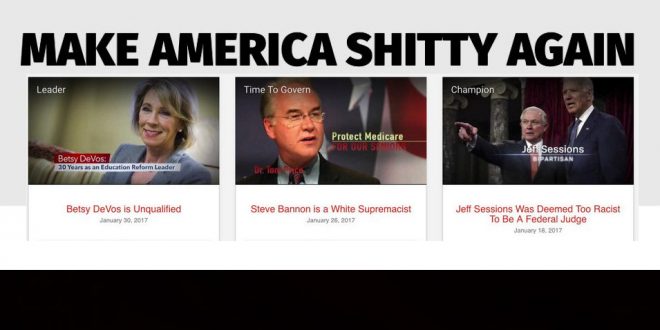 The 45 Committee — a PAC started by mega-donors Todd Ricketts and Sheldon Adelson — released a new ad pushing Trump’s Cabinet picks this week, while some key members like education nominee Betsy DeVos hang in peril of being rejected in the Senate.

But the group was forced to take down its site after hackers got in and re-labeled some videos — a spot pushing Tom Price for Health and Human Services secretary was re-named “Steve Bannon is a White Supremacist” and the spot supporting Sen. Jeff Sessions was dubbed “Sessions is Deemed Too Racist to be a Federal Judge.”

Previous CNN’s Jake Tapper Blasts Trump: He Calls Everything He Doesn’t Like “Not Legitimate Or Fake News” [VIDEO]
Next Spicer: The Times Owes Us An Apology For “Blatant Errors” Because Trump Doesn’t Even Own A Bathrobe