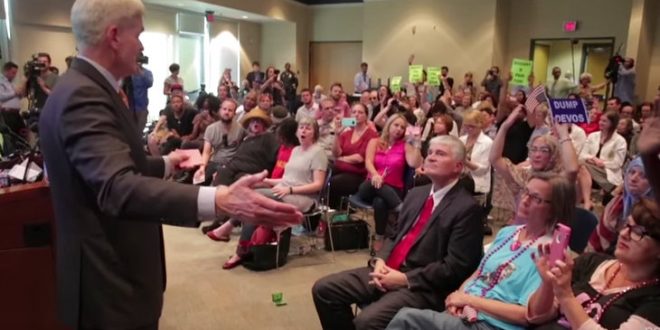 GOP Senator Shows Up Late For Townhall, Accuses Crowd Of “Booing The Name Of Jesus” [VIDEO]

GOP Sen. Bill Cassidy showed up quite late to his townhall yesterday and was SHOCKED to face an angry crowd. The New Orleans Times-Picayune reports:

Sen. Bill Cassidy had to know he was facing a tough crowd when they tried to shout down the invocation. “Amen!” one man hollered just moments after Louisiana State Chaplain Michael Sprague began his prayer. “Let’s get on with it.”

Cassidy never seemed to get rattled, but a little while after the rowdy exercise in democracy came to an end, the senator spotted Sprague in a hallway. “Thanks for doing that, Mike,” Cassidy said. “Wow, they booed the name of Jesus.” And if it didn’t exactly go downhill from there, it never got much better.