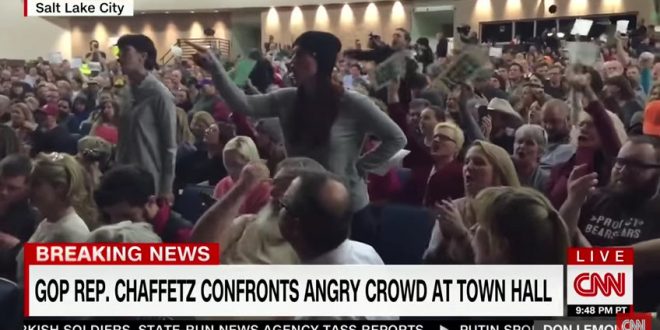 Rep. Jason Chaffetz tried to respond to questions, but many of his answers went unheard. The din of the hostile and harassing audience that filled the 1,000 seats of a high school auditorium Thursday night drowned him out. “Explain yourself,” they roared over him. When the congressman did get a chance to speak, the crowd often didn’t like what he had to say. And he knew it.

The town-hall meeting was 75 minutes of tense exchanges between Chaffetz and residents from across the state. They were frustrated by the Utah Republican’s refusal to investigate President Donald Trump’s potential conflicts of interest. They doggedly pursued him for his initiatives to transfer or sell public lands. They questioned his position on immigration and refugees. And that’s was only half of the largely liberal crowd. About 1,500 people stood outside Brighton High School, too far back to make the cut, their signs reading, “Do your job” and “America is better than this.”

Cancer survivor — who relies on Planned Parenthood for care — asks Chaffetz: “Why are you trying to take [it] away?” pic.twitter.com/yexjMZ7wz6

At rowdy town hall, ex-teacher asks Chaffetz — chair of House oversight — “what’s your line in the sand” for Trump? pic.twitter.com/8U7IkpZtsS

UT typically known as most genteel state in the West. Cong Chaffetz not seeing that tonight @UtahIndivisible @IndivisibleTeam pic.twitter.com/jC7PvL5dkr