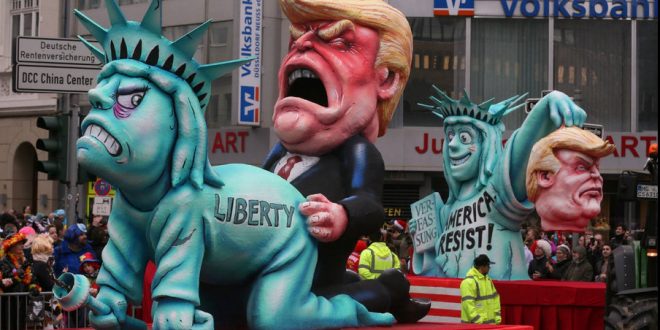 Remember the anti-Trump float at an Italian carnival parade? This one is far less complex but perhaps more biting. The Local reports:

The floats at Karneval parades across southern and western Germany are known for their biting satire. This year the main target of their derision was only ever going to be one man. Carnival is know as die fünfte Jahreszeit (the fifth season) in German. It is a time when the usual rules of polite society are thrown out the window. In the major cities of the Rhine region the inhabitants become Narren (jesters) for a week, mocking the political establishment of the day with satirical floats which parade through the city centres.

In Düsseldorf one of the central floats on Rosenmontag (Rose Monday) showed US President Donald Trump standing next to French presidential hopeful Marine Le Pen, Dutch far-right leader Geert Wilders and Adolf Hitler – all of them sporting carefully coiffed blond manes. Another float in Düsseldorf appeared to show Trump raping the Statue of Liberty, while a neighbouring sculpture inverted a controversial recent Spiegel cover by having the Statue of Liberty behead the US President.