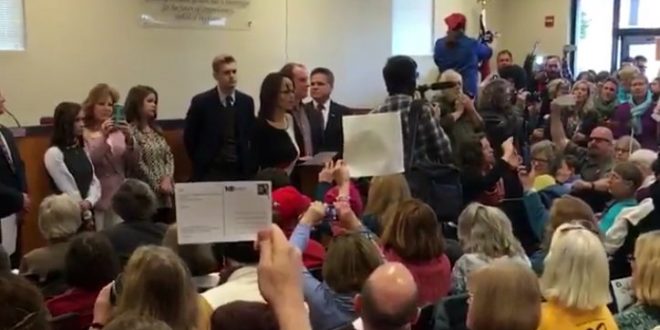 The protests that have rocked Republican town hall meetings across the nation have arrived in Georgia. Dozens of protesters packed a meeting on Friday in Greensboro hosted by aides to U.S. Sens. David Perdue and Johnny Isakson and Rep. Jody Hice. The trio of Republicans, though, was not there.

The meeting – which a Hice spokesman characterized as a routine “constituent service day” featuring private sessions with local residents – is one of the first Republican congressional events in Georgia since Donald Trump’s inauguration. About a half-dozen congressional aides briefly addressed the crowd, telling them the event was not a town hall and they would take no questions from the floor. They left after crowd members chanted “shame, shame, shame.”

Many in the crowd of hundreds drove in from metro Atlanta or Athens, a where a protest group organized a carpool convoy to the event. About half of the group applauded when asked if they lived in Hice’s northeast Georgia district, a deeply-conservative district which includes much of the Democratic bastion of Athens. The lawmakers’ aides said the event was never meant to be a traditional town hall meeting.

"Shame. Shame. Shame." GOP aides walk out of a meeting in Greensboro after getting booed at constituent mtg. https://t.co/xjCX78rR2A #gapol pic.twitter.com/aEqpzpDsUa