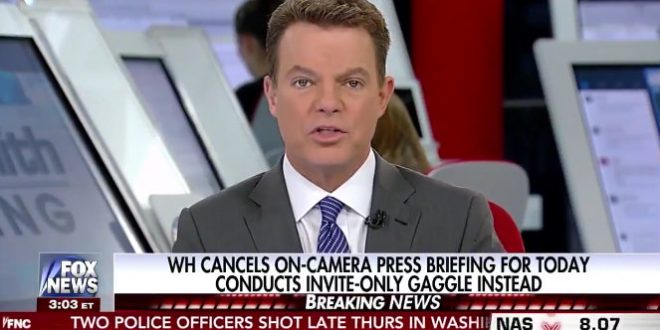 Fox News anchor Shepard Smith defended CNN on Friday after the news organization was barred from spokesman Sean Spicer’s question-and-answer session at the White House. “For the record, ‘fake news’ refers to stories that are created, often by entities pretending to be news organizations, solely to draw clicks and views and are based on nothing of substance,” Smith said during his program.

“In short, fake news is made up nonsense delivered for financial gain. CNN’s reporting was not fake news. Its journalists followed the same standards to which other news organizations, including Fox News, adhere,” he added.

Smith maintained that talking with White House officials off the record does not fit into the category of fake news. “Senior administration officials regularly speak without attribution so that the public can be informed of what our government is doing, off the record,” he said.

WATCH: For the third time in two months, Fox News’ Shep Smith has stood up for a free press. “CNN is not fake news” pic.twitter.com/wbJmy7LMiD

Previous Trump’s Stupidest Lie For Today (But Only Today)
Next Family Research Council: Pray That White Jesus Stops George Soros And His Army Of “Paid Operatives”