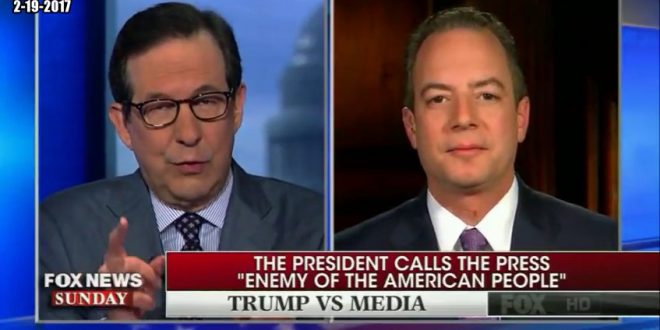 Fox Host Chris Wallace Blasts Priebus: Obama Didn’t Get To Tell Us What To Do And You Don’t Either [VIDEO]

Fox’s Chris Wallace put White House Chief of Staff Reince Priebus on the hot seat this morning over President Trump‘s tweet calling the press the “enemy” of the American people. Priebus expressed his frustrations with news outlets running untrue stories about the White House and Russia, railing against the use of anonymous sources and saying the reports about Trump advisors being in “constant contact” with Russian intel officers and the intel community allegedly withholding information from the president are both inaccurate.

Wallace circled back to the press issue and said there’s nothing wrong with criticizing media bias, but Trump’s tweet went well beyond that. “We don’t have a state-run media in this country,” Wallace said. “That’s what they have in dictatorships.” Wallace: “You don’t get to tell us what to do any more than Barack Obama did. Barack Obama whined about Fox News all the time, but I gotta say, he never said we were an enemy of the people.”

Previous Reince Priebus: Take Trump’s Comments On Media Being The Enemy Seriously, Because They Are [VIDEO]
Next REPORT: Bill Clinton Moved To Tears After Waiter Gets On Knees To Thank Him Saving His Life In Kosovo