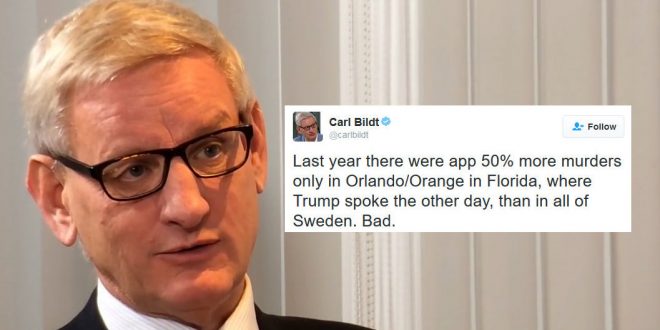 Former Swedish Prime Minister Carl Bildt responded to President Trump’s remarks on Sweden again — this time with statistics on the country’s crime rates. In a tweet Monday morning, Bildt said the counties Trump made the speech at in Florida experienced higher murder rates last year than the whole country of Sweden did.

The largest mass shooting in U.S. history occurred at an Orlando, Fla., nightclub in June 2016 when Omar Mahteen entered the Pulse Nightclub and shot and killed 49 people. He was killed at the nightclub after a shoot-out with police.

Trump clarified his comments on Sunday, saying he was referencing a Fox News segment on immigration in Sweden. However, Reuters reported that crime rates in the country have decreased since 2005 even as hundreds of thousands of refugees have entered the country.

Trump’s speech was actually in Melbourne, which is in Brevard County, but Bildt’s point stands.