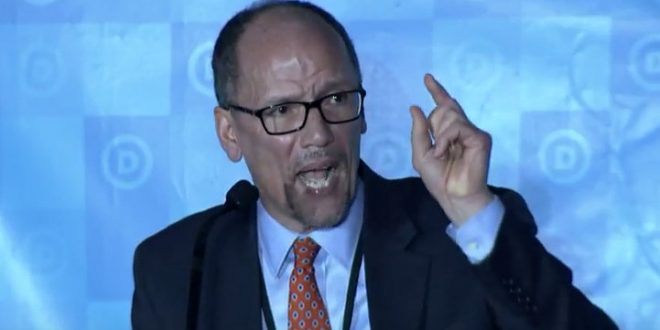 Former Secretary of Labor Tom Perez was elected chairman of the Democratic National Committee this afternoon in Atlanta on the second ballot after coming within a half-vote of winning during the first round. (Democrats Abroad get a half-vote each.) Perez narrowly beat Rep. Keith Ellison with a final second round tally of 235-200.

Considerable controversy erupted during the first round when supporters of Ellison issued texts claiming that candidate Pete Buttigieg, the openly gay mayor of South Bend, Indiana, had thrown his support to Ellison. A text message retracting that claim was only made after first round voting had closed. Despite that, Ellison still trailed Perez by 13.5 votes when first round ballots were tabulated. Buttigieg earned one vote in that round.

Ellison, perhaps obviously, was the overwhelming favorite of Bernie Sanders supporters, many of whom have bombarded the #DNCchair hashtag on Twitter with vows to abandon the Democratic Party entirely should he lose. VIDEO: The full event was live-streamed and you can rewind to any spot in the proceedings.

To clarify: I have made NO ENDORSEMENT for DNC Chair

So thankful for the @PeteforDNC team and all who supported us, and I look forward to supporting whoever the new chair is to build out party.