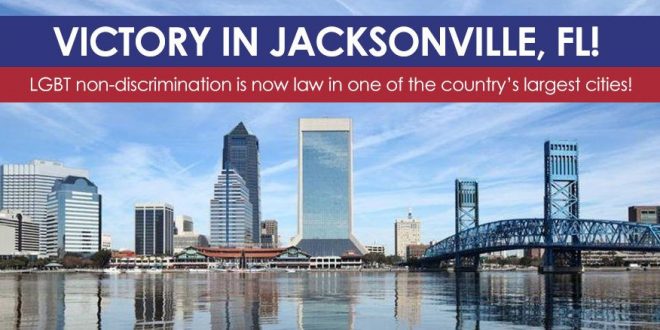 I first began reporting on this ugly battle five years ago and last night the good guys finally won. The Florida Times-Union reports:

The council’s vote was a historic moment in the local battle for gay rights that’s loomed over Jacksonville for nearly half a decade — and Curry’s swift decision quickly ended any uncertainty over whether the legislation would become the law of the land.

While opponents offered several unfriendly amendments, the legislation was never in danger of being derailed or significantly altered. Councilman Bill Gulliford proposed holding a countywide election to let voters decide the issue. He also proposed delaying the final vote and changing the legislation to only prohibit discrimination on the basis of sexual orientation, but not gender identity. Councilman Danny Becton proposed exempting any privately owned business from the law. All three amendments overwhelmingly failed.

You may recall that when Jacksonville last battled for its LGBT rights ordinance in January 2016, a local man told the city council that as a self-admitted pedophile, he feared that giving LGBT people civil rights would only encourage people like him. The man was later exposed to be a member of a local church that was leading opposition to the ordinance. (Tipped by JMG reader Bernie)

Yesterday, after years of hard work and courageous advocacy from the local LGBTQ residents, businesses owners, faith voices and community leaders, the Jacksonville City Council has voted to ban discrimination on the basis of sexual orientation and gender identity and expression by a 12 to 6 vote.

“After years of hard work and courageous advocacy, Jacksonville has sent a clear message to Florida and the entire country that discrimination of any kind is wrong and that LGBTQ people are welcomed and accepted,” said Amber Paoloemilio, Field Director of Equality Florida.

Over the last five years, because of the personal stories from LGBTQ people, business owners, and faith leaders, Jacksonville public opinion has transformed. Based on a 2015 poll conducted by the University of North Florida, over 62% of voters support this important update to the Human Rights Ordinance.

RELATED: Jacksonville is the most-populous city in Florida, the 12th most-populous in the country, and the largest US city by area. All of that is largely due to its sprawling city limits, which encompass almost all of Duval County, whose government is consolidated with Jacksonville.