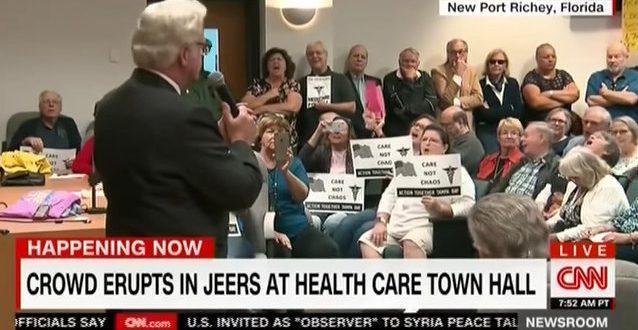 During a town hall for Rep. Gus Bilirakis (R-FL) today, the secretary of the county’s Republican Party was met with loud jeers and chants of “liar” when he made the claim that there’s a “death panel” provision in the Affordable Care Act. Speaking to the crowd, Bill Akins attempted to explain why he was against Obamacare, but found resistance when he made a specific claim.

“Here’s the problem i have with the Affordable Care Act,” he said. “Number one, there is a provision in there that anyone over the age of 74 has to go before what is effectively a death panel.” The moment after uttering those words, the audience went ballistic, with many shouting “no” and yelling out that Akins was lying. “OK, children. Alright, children,” Akins stated, mocking the crowd.

The claim Obamacare calls for death panels was Politifact’s “Lie Of The Year” for 2009. And yet idiots shamelessly continue to say it.