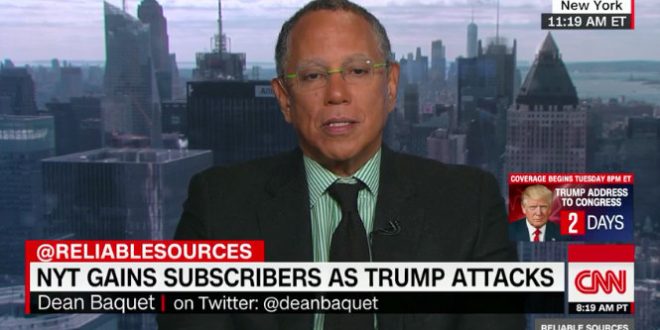 With President Donald Trump continuing his attacks on the New York Times this morning by once again labeling the paper as “failing,” NYT executive editor Dean Baquet appeared on CNN’s Reliable Sources to discuss the president’s relationship with his publication, the press in general, and how Trump has actually been a boon for the Gray Lady.

After host Brian Stelter noted that Trump has tried to get the nickname to stick by using the term “failing” 53 times on Twitter to describe the Times, he asked Baquet what the facts were. “We’re not failing at all,” the editor responded. “Our digital subscriptions are going through the roof. Even print subscriptions are up. We’re a profitable company.”

He then added that this was an “effort by this administration to minimize the press.” Baquet further explained that the president’s tweets are also designed to minimize other institutions that are there to hold him accountable. “I think that’s dangerous,” he said.