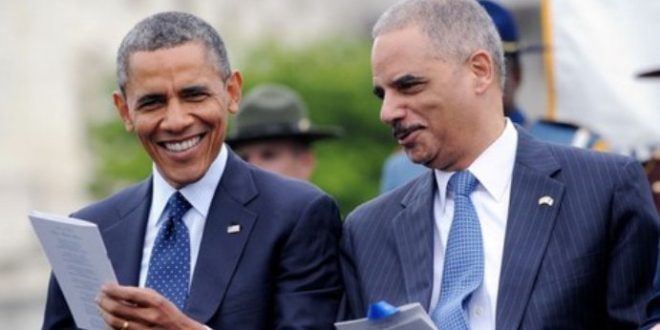 Eric Holder: Obama Is “Ready To Roll” Back Into Politics With Dem Fundraising And Redistricting Efforts

Barack Obama is getting closer to making his public reappearance in politics, his friend and former Attorney General Eric Holder said on Tuesday. Holder said he’s been talking to the former president about ways — including fundraising and interacting with state legislators — that could help the new National Democratic Redistricting Committee, which Obama asked Holder to chair last year.

“It’s coming. He’s coming,” Holder said, speaking to reporters at a briefing for the new group. “And he’s ready to roll.” Throughout, Holder said, Obama “will be a more visible part of the effort.” Holder also predicted that the usual pattern of the party in the White House losing state legislative seats in off-year elections would hold next year, but “I expect we’ll see that on steroids with President Trump.”

Previous REPORT: Bannon Purposely Launched Travel Ban On Weekend To Enable Protests That Would Enrage Base
Next Catholic League: ABC’s LGBT Rights Miniseries When We Rise Is Just More Of Hollywood’s Anti-Catholic Bigotry