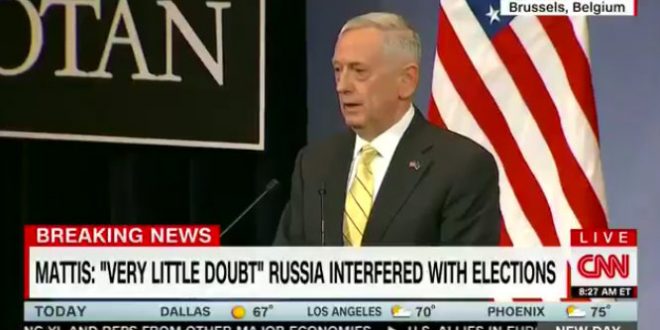 Defense Secretary James Mattis Contradicts Trump: There Will Be No Military Collaboration With Russia

The U.S. is not ready to collaborate militarily with Russia, Defense Secretary Jim Mattis said Thursday, appearing to close the door for now on any effort to work more closely with Moscow in the fight against Islamic State militants in Syria.

His blunt rejection came after Russian President Vladimir Putin called for increased intelligence cooperation with the U.S. and NATO, and it makes such coordination less likely at least in the near future. Mattis followed his dismissal with a sharp assessment of Russia’s alleged election meddling, saying there is “very little doubt that they have either interfered or they have attempted to interfere in a number of elections in the democracies.”

His comments raised questions about the Trump administration’s policies on Russia. As a candidate, President Donald Trump repeatedly praised Putin, saying he wanted a new era of cooperation with Moscow. Speaking at a meeting of NATO defense ministers, Mattis said the U.S. will continue to engage politically with Putin’s government to try to find common ground.