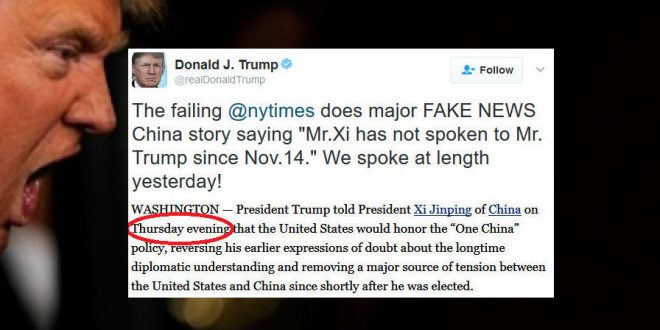 This morning Trump screamed that the “FAKE NEWS” New York Times lied in their story about his call with Chinese president Xi Jingping. As you can see, the very first line of their story mentions last night’s call. Twitter wags note that Trump is probably looking at the print version of today’s Times, which went to press before the White House revealed last night’s call. Whatever the case, hundreds of responses to Trump’s tweet feature gleeful screencaps of the first paragraph of the Times story or slam him for caving on the “one China” policy.

The failing @nytimes does major FAKE NEWS China story saying “Mr.Xi has not spoken to Mr. Trump since Nov.14.” We spoke at length yesterday!