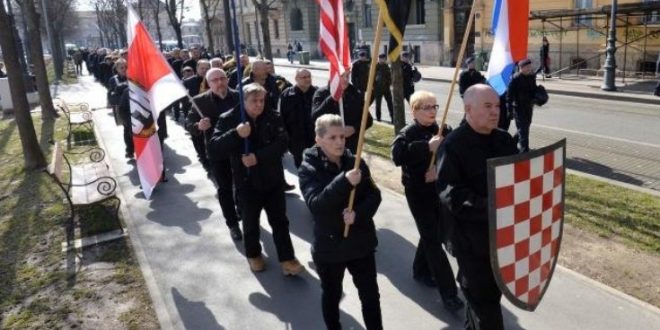 Today in “things that aren’t great,” a small group of far-right protesters in Croatia carried the US flag while shouting pro-Nazi slogans and pledged support to President Donald Trump. The few dozen black-clad demonstrators were members of the small Indigenous Croatian Party of Rights (A-HSP), a far-right political group that is too small to be represented in Croatia’s parliament. But they definitely know how to grab people’s attention, as Sunday’s gathering in Zagreb, the country’s capital, showed.

Alongside the US flag, the group also carried both the Croatian flag and the flag of the Nationaldemokratische Partei Deutschland (NDP), a party that German states have tried to ban for its similarity to the actual Nazi Party. Croatia isn’t the only Balkan country where far-right parties are backing Trump. Last year, Serbian Radical Party leader Vojislav Seselj, who was previously accused of committing war crimes in the 1990s, led a rally to praise the then-candidate. So a few dozen neo-Nazis in Croatia opted to wave the US flag during a march, pledging support for Trump https://t.co/dgdgs3Cyjb pic.twitter.com/Uul1AXWKPj