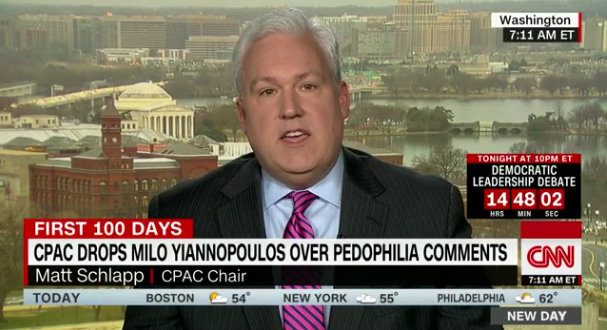 The host of the Conservative Political Action Conference (CPAC) on Wednesday defended his decision to rescind right-wing provocateur Milo Yiannopoulos’s invitation to speak at the event. During an interview Wednesday on CNN’s “New Day,” American Conservative Union chairman Matt Schlapp said the initial invitation to speak at CPAC was not an endorsement of Yiannopoulos.

“We have all kinds of people speak, whose views might in cases be repugnant to mine and to others of our attendees, but we want to foster a debate,” he said. “I just felt like with an attendee group that is up to 50 percent college-age and younger … these questions around pedophilia and sexual contact with kids was going to distract from that political conversation.” Schlapp said he condemns the alt-right, but thinks it’s a problem when “we shut down the political debate.”

“I think oftentimes the political debate is what puts a light on intolerance and people, Americans, can see that and they can make their judgments,” he said.