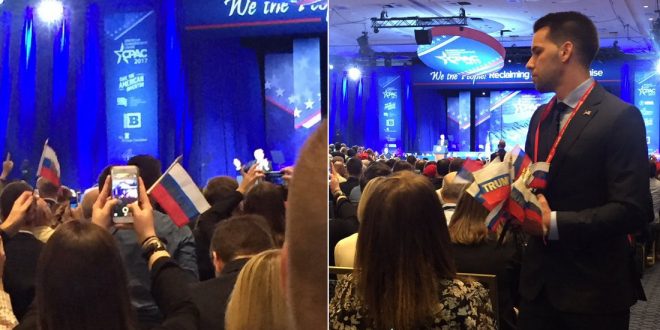 Staffers at CPAC quickly scrambled to confiscate Russian flags with the word “TRUMP” written on the front that were being waved by attendees during President Donald Trump’s speech on Friday. The trouble began when some attendees took out pro-Trump flags to wave during the president’s speech that also happened to have the same white-blue-and-red striped pattern as Russian’s official flag. Reporter Peter Hamby notes that CPAC staffers quickly realized that its attendees were waving Russian flags, and moved quickly to confiscate them.

Crowd at CPAC waving these little pro-Trump flags that look exactly like the Russian flag. Staffers quickly come around to confiscate them. pic.twitter.com/YhPpkwFCNc

Previous LIVE VIDEO: Trump Speaks At CPAC
Next KANSAS: Murder Charges For Man Who Shoots Three After Shouting “Get Out Of My Country” [VIDEO]