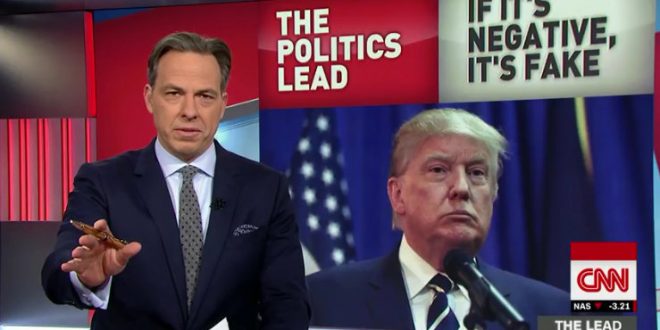 CNN’s Jake Tapper Blasts Trump: He Calls Everything He Doesn’t Like “Not Legitimate Or Fake News” [VIDEO]

At the beginning of this afternoon’s broadcast of CNN’s The Lead, host Jake Tapper went off on recent tweets and comments made by President Donald Trump. Explaining that Trump’s tweets “are windows into his soul,” Tapper began reading off the president’s recent Twitter activity targeting a federal judge who temporarily suspended Trump’s travel ban, negative polls and the media.

Highlighting POTUS’s tweet that stated “any negative polls are fake news,” Tapper repeated the phrase before remarking on what the president was really conveying. “Got that,” the anchor noted. “Any polling suggesting anything negative about the president or his policies is not, in his view, real.”

This led Tapper to comment that Trump feels that “two fundamental pillars of our democracy” are “not legitimate” if they take actions he doesn’t like. “Okay,” Tapper remarked. “What about a known geopolitical foe of the United States like, say, I don’t know, Russian President Vladimir Putin?”

.@jaketapper: Any polls suggesting anything negative about the President or his policies is not, in his view, real. https://t.co/mJbEKZR9Dd