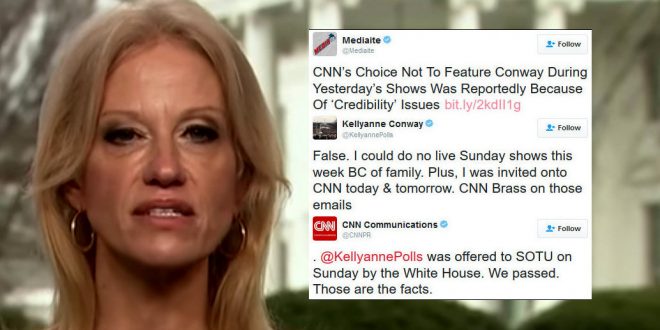 CNN took to Twitter Monday morning to confirm a report that the cable news network turned down a Sunday interview offer with Kellyanne Conway.

After a New York Times Sunday story reported the network has “serious questions about her credibility” and declined to have her on as a TV guest, the senior adviser to President Donald Trump took to Twitter to deny the report.

“False,” she wrote on Monday morning in response to an article about the Times story. “I could do no live Sunday shows this week BC of family. Plus, I was invited onto CNN today & tomorrow. CNN Brass on those emails.”

Twenty minutes later, however, CNN confirmed they passed on the White House’s offer to bring Conway on Sunday’s State of the Union. “@KellyannePolls was offered to SOTU on Sunday by the White House. We passed. Those are the facts,” tweeted CNN from its public relations handle.