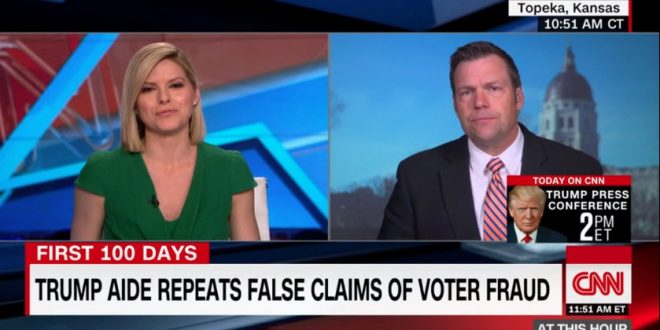 CNN host Kate Bolduan unsuccessfully tried to get Kansas Secretary of State Kris Kobach (R), an adviser to President Donald Trump, to produce evidence to back up the White House’s voter fraud allegations.

During a Sunday interview with ABC News, White House policy director Stephen Miller defended Trump’s claim that thousands of people had been bused into New Hampshire to vote illegally.

“You have nine cases,” Bolduan said. “Six guilty pleas, one dismissed, two pending. That’s as of January 25th. Nine cases does not rampant widespread voter fraud make.” The Kansas secretary of state countered by insisting that the nine cases were “just the ones at the top of the list.”

“We’ve got many more in the hopper,” he continued, sounding defeated. “We have a very small office. We’ve only got about two attorneys working on these cases. There will be more coming up.”

“A small minority does not make millions and millions of widespread, rampant votes in this country,” Bolduan stated. “What Stephen Miller and the president said over the weekend is this is exactly why they lost in New Hampshire. Not saying they were prospective cases, they were illegal votes.”

This image shows proof of @CNN bias. They run text below my picture claiming my statements are false. So much for letting the viewer decide. pic.twitter.com/vXslvF7oKk