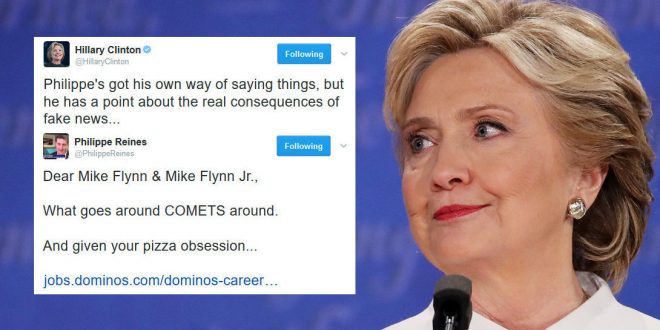 BURN NOTICE: Hillary Twists The Knife In Flynn Over Pizzagate, Suggests He Get A Job At Dominos

Michael Flynn was among the harshest critics of Hillary Clinton’s private email server during the presidential campaign. So it is hardly surprising that the former Democratic contender exacted a smidgen of wry revenge Tuesday after Flynn resigned as President Donald Trump’s national security adviser. Clinton posted a message referring to tweets by Flynn and his son last year in which they linked to baseless news stories about her campaign. Clinton’s message included a joke by Philippe Reines, who worked for Clinton in both the Senate and State Department. Reines played the part of Trump during the Clinton team’s mock debates in the campaign.

What goes around COMETS around.

And given your pizza obsession…https://t.co/rmyO7wyJKX

Philippe's got his own way of saying things, but he has a point about the real consequences of fake news… https://t.co/a02sXiaHfp