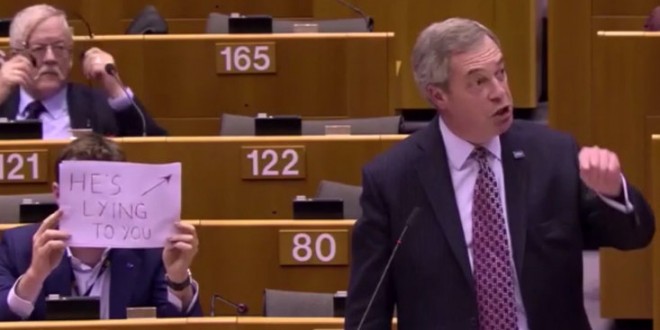 Ranting Brexit cheerleader Nigel Farage was the victim of some top trolling in Brussels as a fellow MEP held up a sign behind him claiming: “He’s lying to you”. Seb Dance scribbled the note on a piece of paper along with an arrow pointing to the ex-UKIP leader and carefully positioned it behind him during a European Parliament session.

Farage was speaking passionately in praise of his right-wing cohort Donald Trump and the American President’s controversial travel ban on seven majority Muslim countries that sparked worldwide protests. A picture of the parliament scene has racked up thousands of likes and shares on social media with foreign newspapers lapping up the story.

Previous SWAMPITY: Senate Confirms Tillerson In 56-43 Vote
Next Court Orders Trump To Pay $6M To Golf Club Members Whose Deposits Were Kept When They Resigned