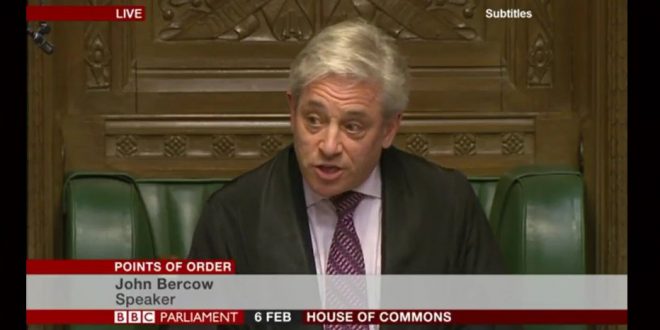 House of Commons Speaker John Bercow has said he would be “strongly opposed” to US President Donald Trump addressing the Houses of Parliament during his state visit to the UK. Mr Bercow told MPs “opposition to racism and sexism” were “hugely important considerations”. He was applauded by SNP MPs after his comments. President Trump was invited to make a state visit after meeting Theresa May in Washington last month.

A petition to withdraw the invitation will be debated by MPs on 20 February after attracting 1.8m signatures. Responding to a point of order in the House of Commons, Mr Bercow set out his opposition to a Parliamentary address as part of the state visit. He told MPs addressing the Lords and the Commons was “an earned honour” not an “automatic right”. Mr Bercow’s intervention was welcomed by Labour leader Jeremy Corbyn, who has called for the state visit to be postponed, while Lib Dem leader Tim Farron said Mr Trump was “not welcome”.

Previous Wingnut Laura Ingraham Rages That Lady Gaga Didn’t Say “Under God” At Super Bowl, Which She Actually Did
Next CNN Publicly Calls Out Kellyanne Conway For Lying About Being Rejected For Yesterday’s Morning Show